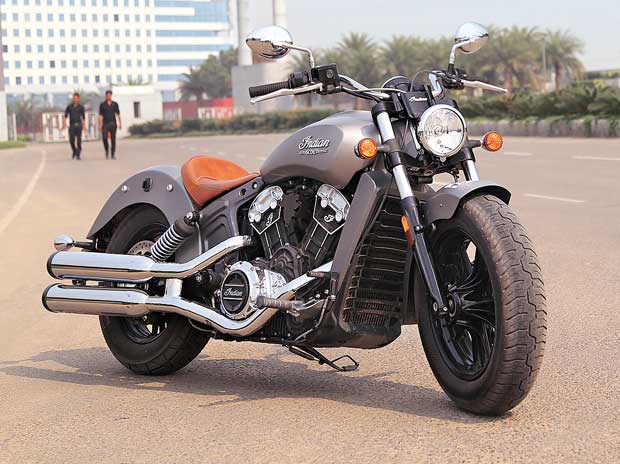 Easy rider from the west

The beautifully designed, smooth-riding Indian Scout had me at hello

It is compact in size, all matte finish with very little of chrome, and
looks as lean as a fit Hollywood actor, though by no means does it
appear to be a weakling. I am talking about the Indian Scout. It is a
retro cruiser in spirit, but you wouldn’t be out of place riding it in a
modern city. What is refreshing to find is that unlike most motorbikes
in the cruiser segment, the Scout does not imitate the venerable
Harley-Davidson. But then, the Indian comes from the oldest cruiser
maker in the world and it has a style all its own.

The Scout is actually the antithesis of a cruiser. What makes it
practical and easier to ride is its straighter seating stance, unlike
the usual laidback posture of the regular cruiser. You have to stretch
your legs, yes, but the foot pegs aren’t at an exaggerated distance. For
us Indians, who are not the tallest people in the world, this is
something to be thankful about. Normally, riding cruisers, I would be on
the tip of my toes while using the brakes and gear shift. Not in the
Scout. Another admirable quality of the Scout is its simplicity. There
is no bling and its ramrod straight design makes it a unique vehicle.

The Scout’s low center of gravity hints at easy maneuverability even in
city traffic. Fire up the engine and the liquid cooled V-twin 1,133cc
engine roars to life. It is not as loud as I would have liked, but then
that is like preferring a certain genre in music, a personal choice. The
exhaust notes will not rattle your neighbor’s windowpanes, but people
will certainly know the Scout has arrived.

The engine responds like a street bike’s; there is no lazy “give me a
second to settle down” pick-up. You would actually need to be slightly
careful and alert because the Indian machine has the cojones to shove
you back abruptly. My advice is: don’t think you are riding a cruiser,
else be prepared for a shock treatment. The Scout is like a young
stallion always ready to gallop recklessly. The higher you rev it, the
more it feels at home. The power response is so addictive that it left
me loath to get off the bike.

Crossing the three-figure mark is child’s play for the bike, and it is
while going in excess of 150 kmph that it starts warming up. Honestly,
my mind had a hard time figuring out what to call this bike. Is it a
cruiser? A city bike? A sports bike? Eventually, I decided not to pursue
the matter further. It is the Scout, let it remain the Scout.

If the hunger of its 100- pony engine was impressive, then its handling
capabilities were even more praiseworthy. The Scout weighs 253 kg,
virtually the same as the Harley-Davidson SuperLow.
It, therefore, easily waltzes its way through traffic. This bike never
ceases to amaze as its refinement and build quality are almost flawless.
Whether it is making its way through painfully slow traffic or cruising
at high speed, you will feel no vibrations, something that not many
high-end bike makers can promise to buyers. The quality of the Indian
bikes has always been unsurpassed. Because of this, it was expected that
the motorcycle would cost almost double what other expensive brands
cost. But the Scout is Indian’s entry-level bike, and while it is by no
means cheap, no corners have been cut while determining the price tag
either. That speaks volumes about the commitment Indian, or rather the
parent company, Polaris, has for its products. 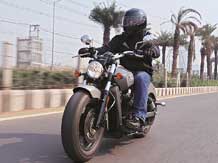 What usually cripples a cruiser is its turning radius. One has to watch
the traffic, calculate the space you have and then finally make a move.
But in the case of the Scout, it takes curves with ease and the tyres
provide a lot grip.

If I had to crib about something, then it has to be the instrument
cluster and the speedometer. They are too basic and look under-designed.
Plus there is no fuel gauge, which is simply unpardonable. Many riders
may also complain about its being a single seater. However, this hiccup
can be resolved with additional accessories.

Ummm, I still can’t figure out how to categorise the Scout. Is it a city
bike or a cruiser? I guess I’ll never figure out the exact answer. My
encounter with the Scout was nothing short of love at first sight. Its
clean-cut designing, lack of chrome, the matte finish and its compact
dimensions had me at hello. The Scout has a beautiful high-revving
responsive engine that is extremely refined and the build quality is
flawless. What is even more impressive is the lack of vibrations. Though
it is Indian’s entry-level machine, it is certainly the most practical
bike in its line-up and if I had the money, I would buy it with my eyes
closed. I would not even bother about accessories because it is perfect
in itself.