A Born-Again Indian Motorcycles Is Here to Dethrone Harley-Davidson 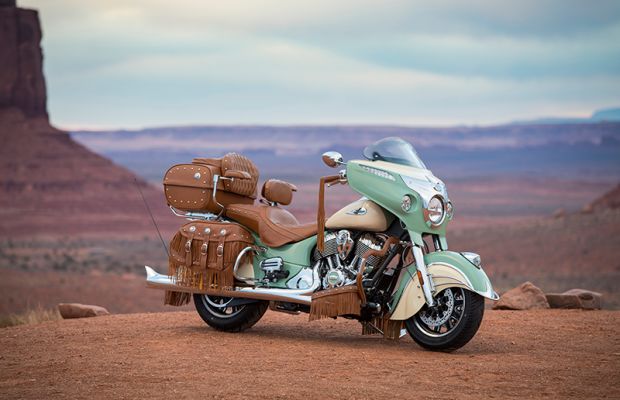 Legend tells of a time when there existed a big American motorcycle company other than Harley-Davidson. It holds that there was an even older bike maker, one founded at the turn of the century in Springfield, Massachusetts, in what was then the nation’s industrial heartland. 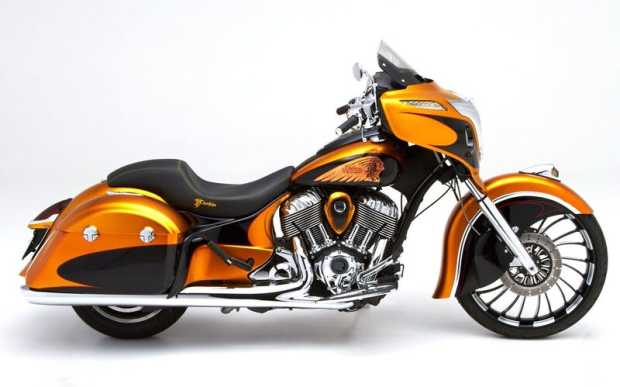 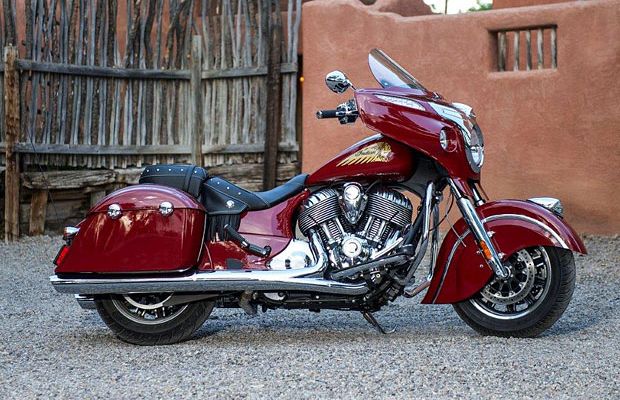 While it is commonly associated with art deco streamlining, especially the skirted fenders and a prominent swept-back Indian chief-in-headdress ornament, that styling didn’t arrive on the company’s Chief model until the 1940s.

These are the styling cues that anchor the new Indian Roadmaster Classic, a heavyweight highway cruiser fitted with abundant leather, a large touring saddle, two-tone paint, loads of chrome and, of course, valanced fenders. 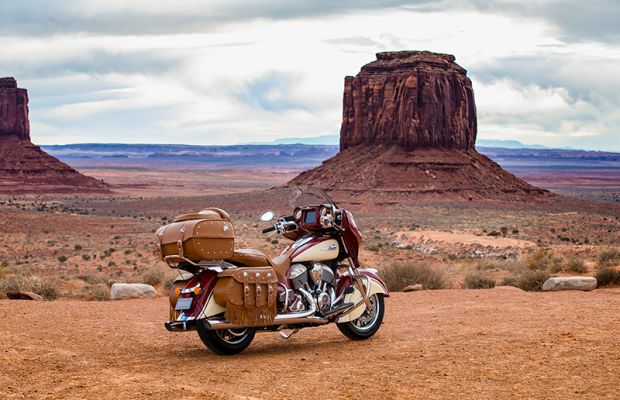 “The Roadmaster Classic is an undeniably beautiful motorcycle that our riders have been asking for,” says Indian Motorcycle marketing director Reid Wilson.

It was the smaller, lightweight Scout that was Indian’s most endearingly popular model. The Scout was the machine that won the very first Daytona 200 motorcycle race in 1937, and it won over riders as one of the world’s first sport bikes. Many of us got our first glimpse of an Indian Scout race bike in the 2005 Anthony Hopkins film The World’s Fastest Indian. But management mistakes doomed Indian to financial collapse in 1953. 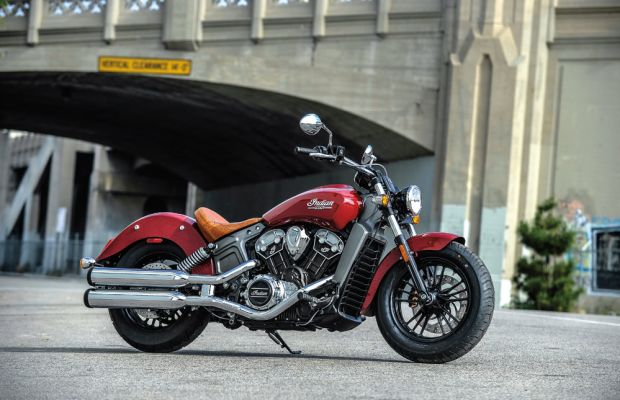 Today Indian, a 20th-century hero, is back from the dead, reanimated with modern technology. Outdoor powersports company Polaris Industries Inc. took over ownership of the long-contested rights to the Indian brand name in 2011 and introduced a new top-of-the-line Indian Chief to the public in 2014. 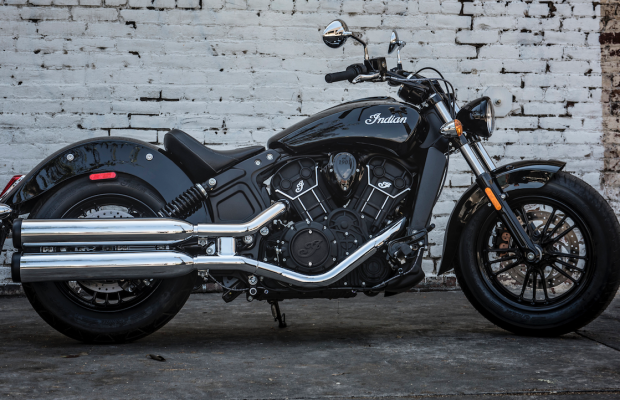 As before, however, a lightweight model is a key component of Indian’s plans, so the company unveiled a new Scout in 2014. It’s a bike that incorporates more modern technology than the traditionalist Chief, and naturally, the new Scout is hitting the racetrack, too.

Today’s Scout model is available as the regular 100-horsepower Scout and the entry-level 78-horsepower Scout Sixty, models that appeal to an entirely different group of customers than those who prefer the massive, old-school Chief in its fully skirted Indian dress.

These new Scouts preserve Indian’s tradition of V-twin engine designs, while updating them with liquid cooling and overhead camshafts for the muscle a Scout deserves.

“We’re really proud of the Scout because it has a great sales performance and has had a great impact on the market,” Wilson explained. 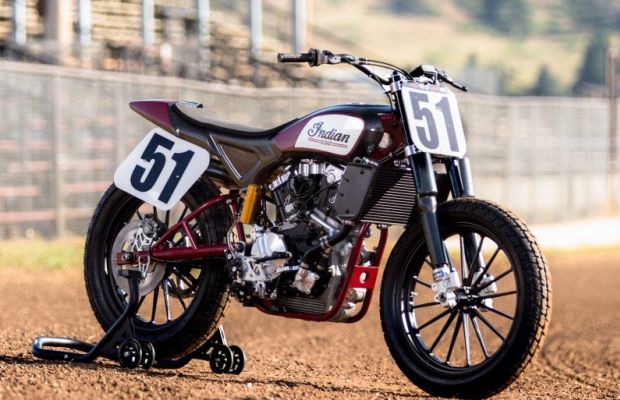 Indian has also introduced the Scout FTR750, which is contesting the AMA Flat Track (AFT) series for the first time since the factory-led “Wrecking Crew” team raced in the 1950s. The company’s stylists toiled to produce a bike that effectively bridges old and new, but any good motorcycle needs to also serve as a suitable canvas for customers to personalize their machines.

Illustrating the Scout’s limitless potential as a custom bike foundation, Indian challenged its dealers to create their own versions of the bike in the Project Scout contest. Interest was so high that fans crashed Indian’s website as they rushed to see the creative results of the shootout.

The customs that emerged from that event should not only inspire prospective owners but also point the way to variants we’ll likely see coming from the factory. “Those designs inspired us,” Wilson says. “We can’t do it next month, but years into the future you’ll see bikes come out based on some of those designs.”

Source: A Born-Again Indian Motorcycles Is Here to Dethrone Harley-Davidson 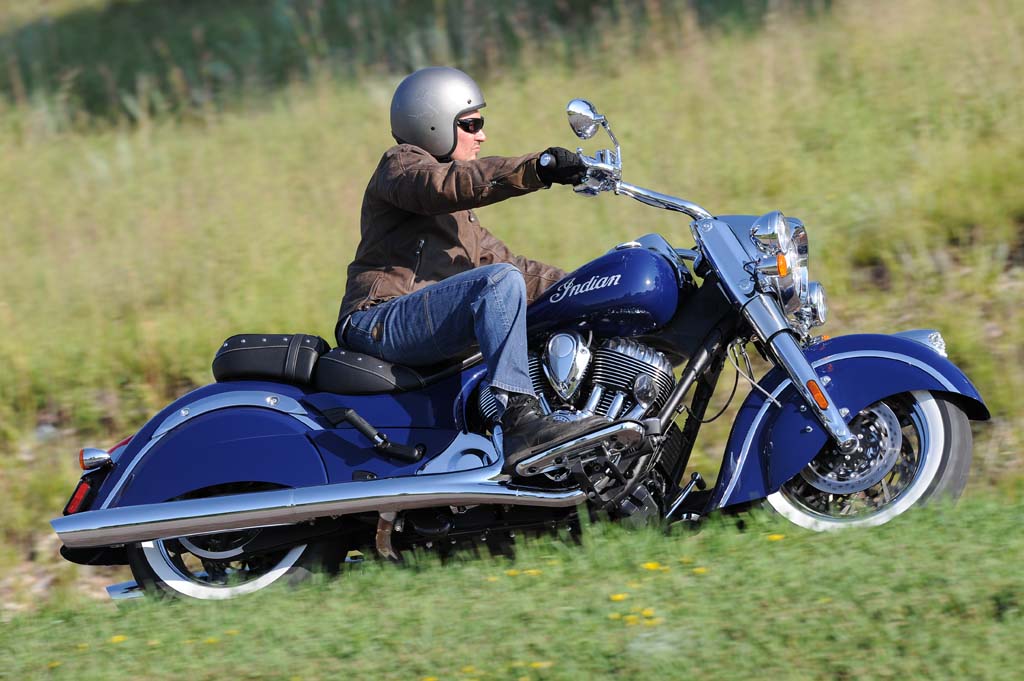 By now you’ve read all of the praise surrounding Indian’s return to selling motorcycles in the 2014 model year. We don’t think the kudos are at all hyperbolic, either. What Polaris accomplished in rescuing the American marque out of the morass of litigation and production of me-too Harley clones bearing the Indian name is notable on its own. Seeing the motorcycles (all three of the models) that came out of a mere 27 months of development has been inspiring. Polaris knows motorsports (being the number-one powersports OEM in North America) and is clearly applying what it’s learned from developing Victory over the past 15 years to the Indian revival.

So, how’d Polaris do it? The key ingredient is the Thunderstroke 111 engine. The 49-degree air-cooled V-Twin perfectly straddled the line between the historic styling of Indian engines (downward-facing exhausts, anyone?) and the requirements of a thoroughly modern powerplant with a ride-by-wire throttle, letting prospective customers know that, while Polaris clearly respects Indian’s past, it plans on producing motorcycles that utilize current technology.

When the motorcycles were revealed to the public, the proof of concept was immediately apparent. Where most manufacturers stick cruisers with tubular steel frames, Indian chose to pursue lightness and strength with an aluminum frame that weighs in at 58 lb. Other systems on the Indian showed a similar level of focus on performance. For example, dual 300mm discs squeezed by four-piston calipers in the front and a 300mm two-piston unit out back – with standard ABS.

Polaris made it very clear that it plans on Indian being seen as a premium brand. The fit and finish of the bikes – from the paint to the quality and amount of chrome – announced that Indian is here, here big, and for the long-term. The same can be said of the Indian logos on just about every visible piece of hardware. The overall feeling is one of quality. Premium is a word that Indian’s representatives like to toss around, and it fits. For example, the entire Indian line comes with cruise control and keyless starting standard.

You may have noticed that, up until now, we’ve been referring to the Indian brand in text that’s supposed to be about the Chief. The reasoning behind this is that all three of the 2014 Indian models were produced around the same platform. Riders have a choice of two Chiefs: the Chief Classic and the Chief Vintage. The Classic is just as the name implies, the archetypical cruiser design: a saddle, floorboards, a pulled-back bar, and deeply skirted fenders. The Vintage takes the Classic and adds supple, tan leather to the seat, a classic cop-style windshield, and leather saddlebags color-matched to the seats.

About the only real complaint anyone had with the Chief (other than your typical moto-journo niggles) was that it required more effort to turn than the Chieftain touring model. How’s that? While the Chief’s rake was 29-degrees, the Chieftain’s was shortened to 25-degrees, bringing about the odd situation where the bigger, heavier bike felt more sprightly than the stripped-down version.

Still, when it comes to riding the Chief, our reviews have been glowing: “These bikes make use of their aluminum-cast frame to dive into corners with nary a bow or flex,” and “You have to give it to Polaris for creating such an authentic machine.” Authentic, that’s the right word for the Indian Chief, the proper blend of history and technology seemingly without compromise. For these reasons, we chose the 2014 Indian Chief our Best Cruiser