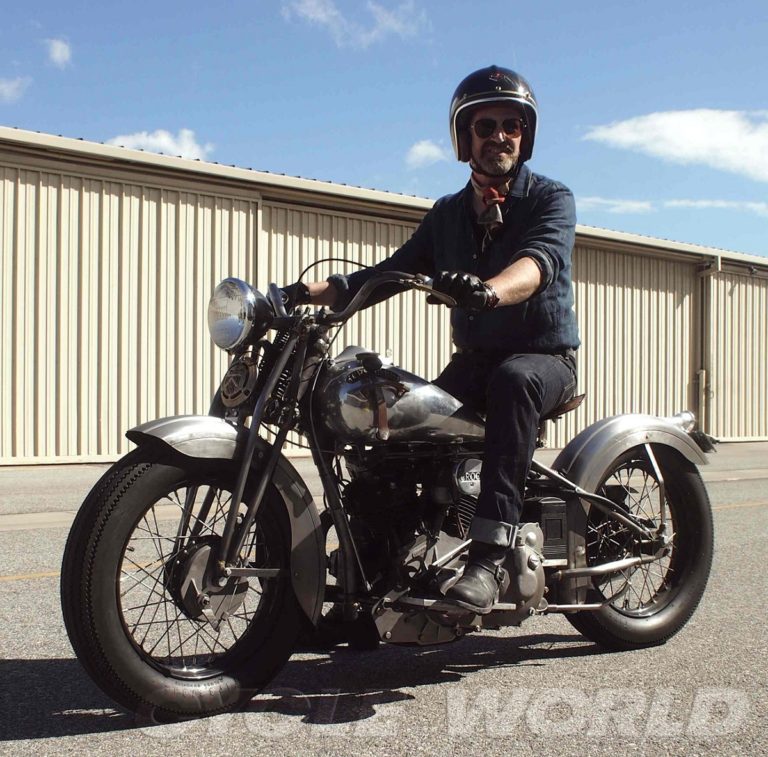 When the new Crocker motorcycle was unveiled at the Quail Motorcycle Gathering last May, Michael Schacht, who owns the Crocker name and built that first prototype, told me I could have a test ride next time I was in L.A. That would mean I’d be the only person besides Schacht to have ridden the new bike. I couldn’t  pass up an opportunity like that, so I met him at his warehouse/assembly shop, where sat the rough makings of the next 15 Crocker V-Twins.

Yep, Schacht is already making a limited run. As he put it, “Whether I have orders or not, I’m just going to build them.” He has invested heavily in cash, time and reputation to make the patterns and cast the parts necessary to build a whole motorcycle, and that first Crocker Big Tank discussed in Cycle World last May was made from the same batch of rough metal seen in these photos.

A deconstructed motorcycle is an excellent teaching device, and Schacht pointed out the changes that Al Crocker incorporated during the evolution of his big Twin between 1936 and 1942, when WWII restrictions put an end to civilian motorcycle production. Schacht doesn’t reproduce the first hemi-head engine, which powered the rare original models Crocker built in 1936. Although the hemi variant commands the biggest prices from collectors, issues with rapid wear on the valve gear means the later parallel-valve heads are more suitable for the modern road. Those first hemis had open rockers, springs and valves, whereas the valve gear in the later engine was totally enclosed. Because of these issues, the hemispherical cylinder head is the only option not available when ordering a new Crocker V-Twin. The early Small Tank frame with different steering-head lugs and unbraced gearbox/lower-frame castings is ready to assemble, as is the later Big Tank style, which most newbies love, since they’re more glamorous. Aficionados prefer the smaller tank, which really shows off that fantastic big Twin engine.

Michael Schacht has something to prove. He’s happy to regale anyone within earshot with tales of attempted intimidation from a few old-time Crocker collectors who take serious issue with his style, his business methods and perhaps the mere fact that he’s done what they said couldn’t be done. In a way, his tales mirror the difficulties Al Crocker faced after building a better bike than Indian and Harley, the last two American motorcycle manufacturers left standing following the Depression. After H-D allegedly threatened its wheel supplier (Kelsey-Hayes) with a massive loss of business if that company sold wheels to Crocker, Al suddenly found he couldn’t buy wheels for his bikes. Solution? If you wanted a Crocker, you had to supply your own wheels.

Such tales are meat and drink to Crocker lovers, who have embellished the reputation of their favorite marque to such effect that you’ll need $300K to buy an original. Schacht is asking half that for his new machine.

How does it compare to the originals? Schacht’s test machine is completely paint-free to show the world how it was built and that it’s indeed all-new. It’s a Big Tank, with those lovely cast-aluminum panniers customizers have been copying for 70 years now. Same with the taillight, as seen (ironically) on thousands of Harleys and bobbed Triumphs through the decades. Like George Brough, Al Crocker was a masterful stylist; unlike GB, he was also a trained engineer, and with the help of Paul Bigsby (inventor of the “whammy bar” on electric guitars), he built his own engine and gearbox. Those designs were an advance on anything available in the U.S. at the time, even after H-D introduced its Knucklehead six months after Crocker got the jump on big 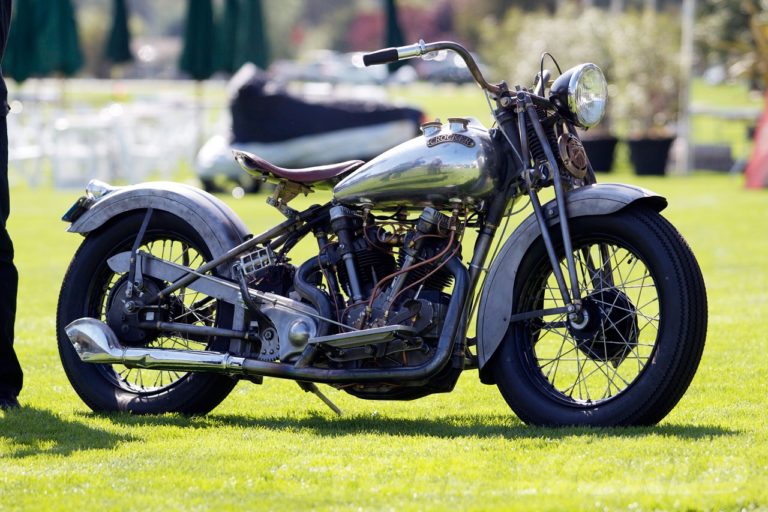 Crocker & Indian Shared a history – Let’s read about the revival….

After nearly twelve years of hassles and legal setbacks, a brand-new Crocker Big-Twin motorcycle has emerged from a hangar in SoCal. Learn more at Cycle World now.

After nearly twelve years of hassles, legal setbacks, a change of countries, and one nasty recession, a brand-new Crocker Big-Tank motorcycle has emerged from a hangar in SoCal. Michael Schacht is at no loss for words in describing the ordeal he’s overcome to reach the point of turning a key, kicking over the 80 cubic-inch V-Twin, and hearing an engine he literally built from scratch rumble into throaty life. His first complete Crocker sits unpainted, brazed joints bright and cast iron dull, spun metal fenders covered with a zillion tiny scratches, the big aluminum tanks resplendent in their own bare-metal shine.

Schacht was a staunch Indian man a dozen years ago, and still rides a 1929 ‘101’ Scout nearly every day. His restored Indians brought him to the attention of a branding company who owned the Indian name in Canada. His machines were used for promo work and he gradually became ‘involved’ with the company, which was mostly interested in T-shirt sales at that time. When talk began of making an Indian motorcycle by re-badging a Ural, Schacht ran away. The idea of resurrecting an important American motorcycle marque stuck with him though, and while looking over two Crockers at a friend’s restoration shop, the big light went on and his destiny was set. “The Crocker name is so pure, nobody had tried to make a new one, even though several people tried to claim the name. It took some work, but I was finally able to secure the name with the intention of starting production of Crockers.”

Few people have made an entire motorcycle from scratch. Schacht admits he knew little of making castings, metallurgy or even production machining before he embarked on his dream.  “I was lucky, and hired some incredibly talented people. I moved my facilities from Canada to Southern California, so that the Crocker would be made 100% in the U.S.A. It was important to me that such a historic name was built, again, in the country it started from. This is an all-American deal.” Schacht also wasn’t an expert on Crockers, but enlisted the help of collectors who are, such as Chuck Vernon. “These guys are the keepers of the flame. They know everything about these machines and helped me tremendously to sort out exactly how the original Crocker was made.” While the new Crocker is as faithful to Al Crocker’s original machine as possible, a few of the materials have been upgraded. “Better steels are available now, stronger and lighter, and while the appearance is identical with a 1939 bike, what’s inside is better.”

The Crocker Motorcycle Company does not, Schacht insists, produce ‘replicas’ of the motorcycles last produced in 1942. “These are continuation machines, built by the legal owner of the Crocker motorcyclename.” The new engine is certainly more powerful than a standard 61-inch Crocker from the 30s, pumping out a whopping 85 horses from the 80-inch V-Twin to push the same 500 pound machine. “We’ve just finished it, and there are a few minor bugs to sort out, but basically, she’s the best sounding motorcycle I’ve ever heard, is really, really fast, and handles beautifully. That was one of my biggest surprises about the Crocker; this is a serious performance machine.”

Stay tuned to Cycle World for additional information about production plans for these machines and a potential modern “retro-bike” in the works.