1912 Indian Single is a two-wheeler that Jay Leno just couldn’t pass up. In this episode he highlights the stock 1912 Indian Single and talks to its owner. The motorcycle was part of the Motorcycle Cannonball Ride and given its age, it seemed like the perfect opportunity to try it out. Yes, this 1912 Indian Single can still hit the streets. It’s owner Alex Trepanier tells us more about its history.

According to him, the 1912 Indian Single has been in their family since before he was born. His dad bought it for $650, back in 1962. Leno, of course, was pretty quick to offer twice the price. However, in this state, the 500cc bike has a current market value in the $70,000 range. Given the fact that it is unrestored and is still functional, the prize range makes sense.

When it comes to power, the 1912 Indian Single has a 4-horsepower single-speed. It has completed more than  3,000 miles in the Cannonball event. Also, it features a total-loss lubrication system. Thus, an interesting fact is that the engine probably consumed 5 quarts of oil each day.

Nevertheless, what Jay Leno is trying to point out is how much effort was put into making motorcycles in the early days. Not many could do it as Indian’s hand clutch and twist-grip throttle was pretty challenging. That’s why it took several false starts by Leno to make the vintage thumper run along. The 1912 Indian Single motorcycle’s top speed is around 35 mph.

But be that as it may, it surely is an exceptional experience to hop on this machine nowadays. The sound of the engine isn’t as pleasant as you would imagine but, all in all, it’s totally worth it. Check it out! 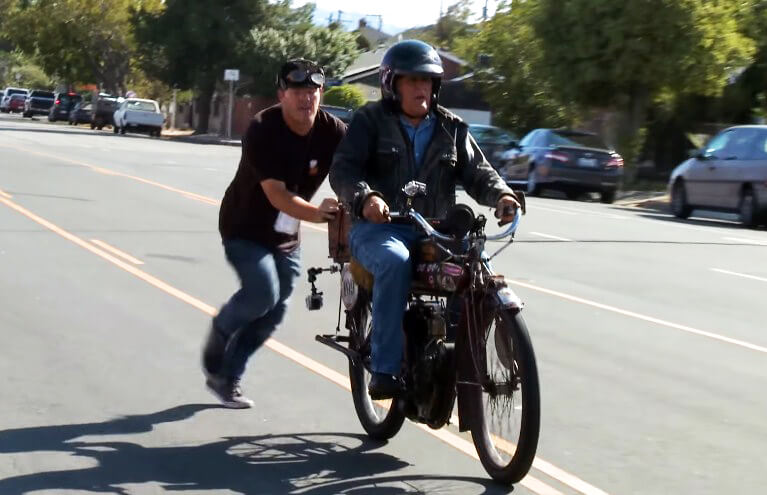 Source: 1912 Indian Single hits the street after a silly start up with Jay Leno!