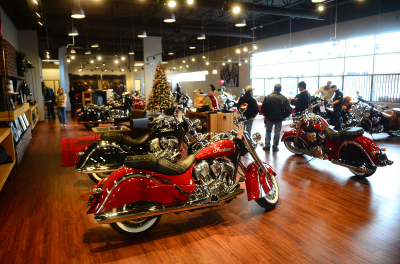 By 11:30 a.m., Alex Quintana already had bought one of its bikes and was aching to take his shiny new 2015 Indian Roadmaster out for its inaugural spin.

“I may ride to Santa Fe to visit my sister,” he said from the showroom at the 9,000-square-foot dealership on Alameda NE. “I don’t know, (but) I’ll go somewhere.”

The retired State Police captain and motorcycle enthusiast was among the first-day crowd that filled the parking lot of the state’s first authorized Indian Motorcycle dealership. Customers milled the wood-floored showroom, where an array of bikes sat parked in their gleaming chrome glory.

The dealership won’t stock the least expensive of the maker’s 2015 rides — the $10,999 Indian Scout — until early next year, though it is accepting pre-orders. Its current inventory includes the Chief Classic, Chief Vintage, Chieftain and Roadmaster — bikes with MSRPs that range from $18,999-$26,999.

Indian — the country’s oldest motorcycle brand — is in the midst of a renaissance. A storied name with a strong racing legacy, the brand changed ownership several times since its 1901 founding and stalled out on multiple occasions. Polaris Industries, a Minnesota-based motorsports company, purchased Indian in 2011 and relaunched it with new bikes last year.

Albuquerque fans seem eager to join the revival. Curious onlookers prowled the local dealership for days before it actually opened its doors.

“We had a crowd here (Monday). We had 42 nose prints on the window — we counted them,” said the dealership’s marketing manager, Big Scotty.

Quintana was among those who stopped by Monday and had to settle for a peek through glass. But he came back early Tuesday and quickly worked out the details of his purchase, including the trade-in of one of his Harley-Davidsons.

Cousins and New Mexico natives Mike Gaillour and Louis Herrera own the dealership. Gaillour said Tuesday that they spent more than 15 months getting everything in place. Asked about the customers who turned out opening day, he said “We’re blessed.”

The dealership’s service and retail operations are open Tuesday through Saturday.