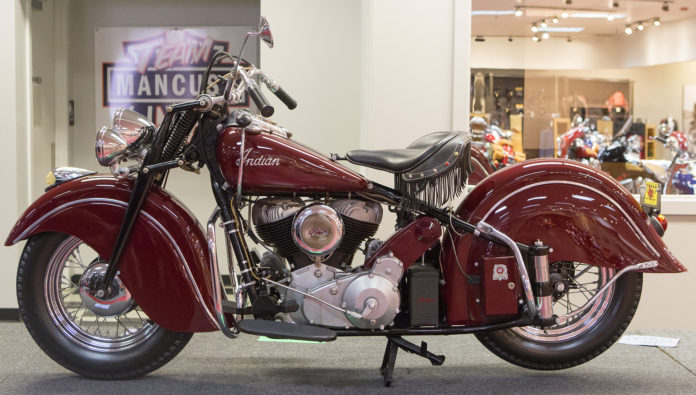 Richards and White are among a number of local enthusiasts,

mostly baby boomers, drawn to the Indian Motorcycle brand’s distinctive lines, described by one design expert as “horseback meets machine,” and famous for such retro features as curved fenders covering half of each wheel and Native American imagery like the “war bonnet” lamp in the shape of an Indian chief’s head. After a bumpy ride for much of its 113-year history – including multiple ownership changes and a pair of bankruptcies – Indian Motorcycle is making a 21st-century comeback. “Retro chic is making a big comeback in lots of areas of retail, because it feels authentic and harkens back to a time when it was easier to trust businesses and life seemed simpler,” Kit Yarrow, professor of business and psychology at Golden Gate University in San Francisco, said this week. Indian and the much larger Harley-Davidson have similarities, said Darrell Harry, chief operating officer of Team Mancuso Powersports, which has seven Houston-area locations and is the exclusive Indian dealer in Houston, selling the bikes at 10222 Gulf Freeway and 10430 Southwest Freeway. Harry said Harley did a better job of developing dealer networks. Since being acquired by Polaris, Indian is increasingly investing in its own dealer infrastructure. The company has signed licenses with 150 U.S. dealers and expects to have 300 in three or four years, wrote Robin Farley, an analyst at UBS Investment Research, in a recent note to investors. Indian Motorcycles come in three models: the entry-level Chief Classic; the Chief Vintage, which has leather saddlebags; and the upper-end Chieftain, named 2013 Motorcycle of the Year by RoadRunner Motorcycle Touring & Travel magazine.