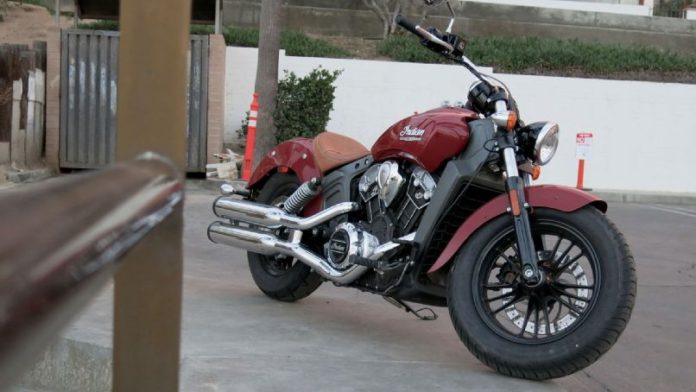 Something’s wrong with the new Scout.

LOS ANGELES, California — It’s an exciting concept, an all-new 2015 Indian Scout. This nameplate has been dead and buried for some 66 years, and yet now I’m riding one down the coast of Southern California just before sunrise. But something about this Scout, a nearly flawless middleweight cruiser dipped in thick blood-red paint, isn’t sitting right with me.

When you unearth a beloved name with a strong heritage, whatever follows must be worthy. The Indian Scout came about in the early 1920s, and it made its mark on the American motorcycle scene as an innovative, lightweight bike that could take a beating.

The “Wrecking Crew” of Ernie Beckman, Bobby Hill, and Bill Tuman won a ton of flat-track races at county fairs on the original Indian Scout in the 1920s. Stunt riders were fond of the 101 Scout for “Wall of Death” stunt riding inside iron cages at carnivals during the 1930s. Burt Munro broke records at the Bonneville Salt Flat in the 1960s on his 1920 Scout. By the time the Scout nameplate disappeared in 1949, it had built a seriously badass reputation that still percolates in the consciousness of motorcycle riders today.

The whole Indian Motorcycle Company folded in 1953, leaving Harley-Davidson as the only remnant of the dozens of motorcycle brands from the early years of the 20th century. Afterwards, the nameplate fell into the hands of a succession of people with big ideas but too little expertise, and assorted English, Italian, Taiwanese, and American bikes were introduced as the rebirth of Indian. Finally, Polaris bought the Indian brand in 2011 and brought to bear its resources as a maker of snowmobiles and ATVs.

“The Indian Scout is a good value, has great sex appeal and, most importantly, it’s easy to ride.”

Once the new Indian Chief hit the street in 2013, Polaris decided that this second-chance brand needed an entry-level cruiser, so Indian got the green light to do a clean-sheet build on a brand-new bike. The 2015 Indian Scout was revealed this past summer at the popular motorcycle gathering in Sturgis, South Dakota. Since then, every motorcycle enthusiast (myself included) has been scheming about a way to free up $11,000 to buy one.

A tough kind of beauty that everyone understands

Over the last few months, I’ve heard the same thing again and again and again: “I don’t really like cruisers, but, man, that Scout. …” The 2015 Indian Scout is a knockout beauty, but not in that perfect, Charlize Theron way. It’s the Uma Thurman kind of beauty, where “elegant” is too soft of a term and “butch” too hard. The 2015 Indian Scout’s smooth curves are finished with hard edges that beautifully envelope the triangular cast-aluminum frame. The full fenders, the prominent lion-tooth fuel tank, and the brown leather-upholstered seat play well together.

This brawny bike is surprisingly approachable, even to civilians. I found myself in conversation with a man driving a Honda CR-V with two little girls in the back seat (their heads bobbing to the music of Taylor Swift, no doubt), a woman in a Mini Cooper with an iPhone in a sparkly pink case pasted to her ear, and a guy on a mountain bike tugging along his 4-year-old son in a TrailGator.

Each of these dialogues ends the same way, as I make a quick salute of goodbye followed by a lot (too much) throttle and a quick release of the clutch. The Scout is a 550-lb bike with fat tires, but it also has a brand-new, 100-hp V-twin with 72 lb-ft of torque — an engine that’s happy to help you lift the front wheel should you be an overzealous showoff. This is not a recommended practice, as it takes a good bit of muscle to keep the Scout running straight and rubber-side down once you finish your stunt. This is a cruiser, so it’s best to build speed slowly and naturally, the way an avalanche comes down a mountainside.

The 2015 Indian Scout is a good value, has great sex appeal, and, most important, it’s easy to ride. The bike’s weight is effortlessly managed in both tight and wide-open corners, the ratios of the six-speed transmission’s gears deliver a broad, easily managed spread of performance, and the big engine is a predictable pussycat that won’t bite unless you taunt it.

Really, there’s little wrong with this comfortable and chic motorcycle. This is why, for the last three days, I’ve been waking up each morning before dawn to cruise along the coast. I’ve come looking for that itch, that thing that isn’t sitting right with me about the Scout. And it isn’t until now, a new sun burning the sky orange and red, that I figure it out.

I’m not on an all-new Scout; I’m on an all-new Indian with a Scout badge. This is not the nimble Scout that went around dirt tracks, spun inside iron cages, or sped across the salt flats. This is simply a slightly downsized version of a big cruiser bike — an Indian Chief-tini.

Of course, my romantic thoughts about the value of tradition don’t really fit in a world where even motorcycle people see heritage as trendy, not hallowed. And, truth be told, I loathe people who look up the road for some imaginary ghost when they already have something wonderful and real at their feet.

The 2015 Indian Scout is a very well-engineered, very cool cruiser with a lot of character, and it will bring new and experienced riders alike to a historic brand.

The sun is well above the horizon to the east, the sky is a pale shade of blue, and morning traffic is starting to thicken around me. As I swing the Scout away from the coast, I notice I can’t see the Scout badges on the bike’s fuel tank from where I sit. This makes me think about two good things. First, the Indian Scout of my imagination is still waiting to be resurrected. And second, I get to ride this Indian while I wait.